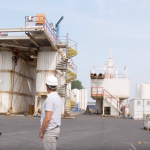 August 2017, the Netherlands WEP was in one of the episodes of the television show ‘Doe Maar Duurzaam’ by the Dutch national television channel RTLZ. WEP’s drilling manager Maarten Middelburg was interviewed about geothermal projects in the Netherlands. The project in the video is the drilling of the geothermal doublet Maasland (MLD-GT-01 & MLD-GT-02) for […]