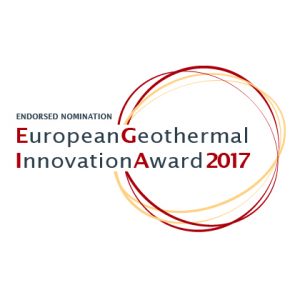 Proudly we announce that the Enhanced Casing Installation by Huisman Well Technology (a joint venture between WEP and Huisman Equipment) is nominated for the European Geothermal Innovation Award 2017.

The top 5 Companies in Geothermal Innovation of 2017

The five endorsed nominations for this year’s European Geothermal Innovation Award are, in alphabetical order:

– HakaGerodur AG (Switzerland), for the pressure-resistant borehole heat exchanger (BHE) for difficult geological conditions and applications up to 300m;

– Huisman Well Technology BV (The Netherlands), for the application of the Enhanced Casing Installation (ECI) system in a geothermal well;

– Jansen AG (Switzerland), for the JANSEN shark technology, which reduces the flow resistance in the pipe and results in less pumping power;

– SWM Services GmbH (Germany), for the project to provide 100% renewable energy for the district heating of Munich, including a major contribution by geothermal energy

“As every year, we have received several impressive nominations, clearly showing that the sector is responding to the current challenges with progress and innovation,” said Ruggero Bertani, Enel Green Power, President of EGEC and member of the jury. “R&D is crucial in identifying new technologies and methods to improve performance, fostering new ideas, and reduce costs. That is why we need to support it and to encourage investments in geothermal sciences, at any level – from engineering, instrumentation, geophysical methods, resource assessment, heat exchangers, drilling technologies … the list is almost endless!”

Designed as an opportunity for industry peers to acknowledge innovation, and for the most exciting ideas to be widely publicised, the European Geothermal Innovation Award is the seal of excellence applied to the most intelligent and important ideas in research and industry which will play a key role in the future development of geothermal energy. Nominations for the award are assessed on grounds of originality, innovation, reliability, reduction of emissions, and improvements in energy output.

The Jury will now deliberate to select an overall winner which will be announced on 15th February at the GeoTHERM expo & congress in Offenburg (Germany).

The European Geothermal Innovation Award is an event by