Target: Delivery of a geothermal doublet

To provide the citizens of Garching with sustainable, environmentally friendly, and cost-effective heat, the EWG (Energie-Wende-Garching GmbH & Co) thought of an energy concept based on geothermal energy and biomass. The aim was to supply the entire city with almost 100% renewable heat energy.

AG Recycling GmbH did the go-ahead for development and utilization of deep geothermal energy in Garching. This company used large amounts of waste wood as fuel in a biomass heating plant. In order to ensure almost 100% of heat supply from renewable energy sources for Garching and Hochbrück, a heat production from biomass (75 percent) and geothermal energy (25 percent) was provided.

To realize the project, AG Recycling GmbH founded Energie-Wende-Garching GmbH & Co. KG (EWG) in cooperation with E.ON Bayern AG, Bayernwerk AG and the city of Garching. In spring 2012, however, AG Recycling GmbH stept out of the EWG in order to fully concentrate on its core business.

The first well was successfully drilled to 2165m (MD) in the fall of 2008. The second hole started at the end of January 2009 and reached TD three months later at a depth of 2,226.5m (MD). Both wells were drilled to the Upper Jurassic (Malm) aquifer.

Up to 4 degrees Celsius outside temperature, the heat supply can be met solely by geothermal energy. At lower temperatures, additional heating of oil is necessary. In February 2013 they converted from oil to cleaner natural gas.

Since 2017, geothermal heat is not only supplied to houses, commercial buildings, Business Campus Garching but also to the ‘Neue Mitte Garching’ with a new auditorium, hotel, convention center and office spaces. 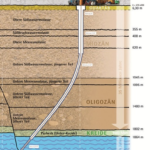 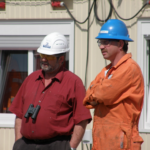 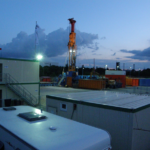 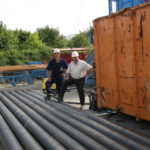