Since September 2014 the production of the well was hampered due to a blockage. Various investigations were performed, among one by Well Engineering Partners, to find the cause of this blockage. Based on this study a repair plan was made, which involved the drilling of a sidetrack.

Due to the limited available space on the surface location, a regular drilling rig could not be placed successfully. Therefore an alternative solution was sought. This was found in the use of a compact Hydraulic Workover Unit (HWU).

Since an HWU is not designed for drilling operations there were some challenges to overcome, such as:

An attempt to retrieve the liner(hanger) was not successful. Therefore the lower section of the well was plugged and a whipstock was set. A casing window was milled and drilling was thereafter successful through the reservoir to the planned well TD. A pre-perforated 5” liner with screens was installed.

The ESP was thereafter installed by a crane based operation. After the installation of the ESP, the well has been brought back to production successfully on the 9th of July. 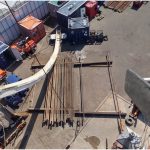 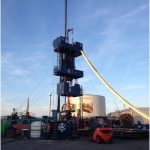