Objective: Design and drill an ERD salt well, from the FRISIA Havenmond location to the Havenmond concession.

The HVM-02 well is the first well to be drilled to the Havenmond concession. The project started with the design of the well. The requirements of the well are S-shape (vertical in the Salt), large step out to reduce subsidence on the land, large wellbore (LCC 13 3/8”) to accommodate simultaneous injection, production and cavern control (blanket).

The drilling rig was a key parameter in drilling the well, >450ton >50 ft.lbs (120rpm) and >3450HP pump power. The KCADEUTAG T-46 was available. The rig was upgrade with a BENTEC750 topdrive to be able to supply the required torque.

Drilling operations started in November 2019 and lasted till August 2020. Due to set backs on the under-reaming of the 16”x20”section and hole stability challenges on the 16”x20” and 14 ¾”x16” the drilling took a lot longer than planned. Additional challenge during the project was the COVID-19 pandemic. For the drilling several service suppliers were contracted with basis’s in several countries (Italy, Germany, Scotland), requiring vigilant personnel planning to prevent an outbreak on the drilling location. Thanks to the efforts of the total team the well was finished as per design and producing salt. 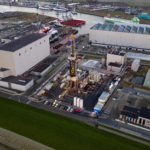 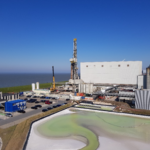