Result: The doublet was brought back into production following the successful completion of the sidetrack

Rock salt has been solution mined by KEM ONE in the South-East of France for over 40 years.  Approximately 20 doublets have been drilled in the Parappon and La Galine fields. The brine is transported by pipe-line to chlorine-alkali facilities near Marseilles and then exploited for industrial purposes.

The PA30 and PA31 sodium chloride doublet wells were drilled in 2008. Both wells, however, began plugging up a couple of years after production.  Coiled Tubing was used in an attempt to clear the plugging in well one but subsequent production tests made little or no connection between them.  A new strategy to drill a 300m sidetrack higher up in PA30 and into PA31 was proposed as the solution.

The HWT 600 Hydraulic workover unit from Balance Point Control (BPC) was then selected to drill with in anticipation that drilling under pressure would be required. The doublet was quickly brought back in to production following the successful completion of sidetrack despite a continuous 200 bar backpressure. Task completed without issue included, window milling, target connection and setting 5” liner in a high pressure environment. 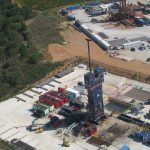 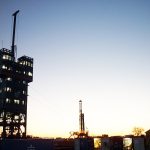