Well Engineering Partners completed two Hydraulic Workover Snubbing Operations (HWO) for two wells in the period January to February 2015. In the 7 weeks, at the first well the remaining completion was retrieved as deep as possible and at the second well, the production tubing was brought back to the original depth. All was done under approximately 90-120 bar wellhead pressure. All workover operations were carried out with a Hydraulic Workover Unit (HWU) of Balance Point Control.

The scope of the well interventions:

1) Well 1: the 4.1/2” dilution string and the 7” x 5” production string were retrieved as deep as possible and wireline measurements were performed.

The HWU moved to the 2nd well. Initially, the 7” suspension string was pulled out of the hole. Then the well was killed with a floating mud cap. After this, a 5” fish was retrieved. Wireline investigations confirmed good well integrity. Then the well was killed again and a 7” x 5” completion with drill-in BHA was run in hole and drilled from 1905 m to 2067m. A wireline real-time tool was used for directional measurements during drilling to monitor the progress. At TD, the tubing was severed just above the BHA with a wireline severing tool to create the new production point. 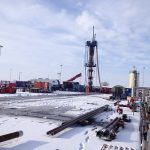 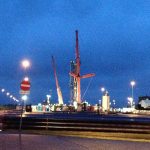 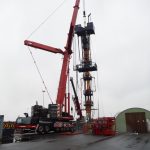