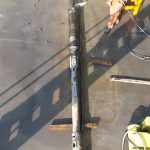 END_OF_DOCUMENT_TOKEN_TO_BE_REPLACED

December 2015, Hoogeveen, The Netherlands WEP became ISO 9001:2008 certified in 2012. The ISO certificate has to be re-issued every 3 years. This month WEP has been visited by the auditor of DNV GL for the so-called recertification audit. And it was a success, WEP received the new certificate for the coming 3 years! During […]